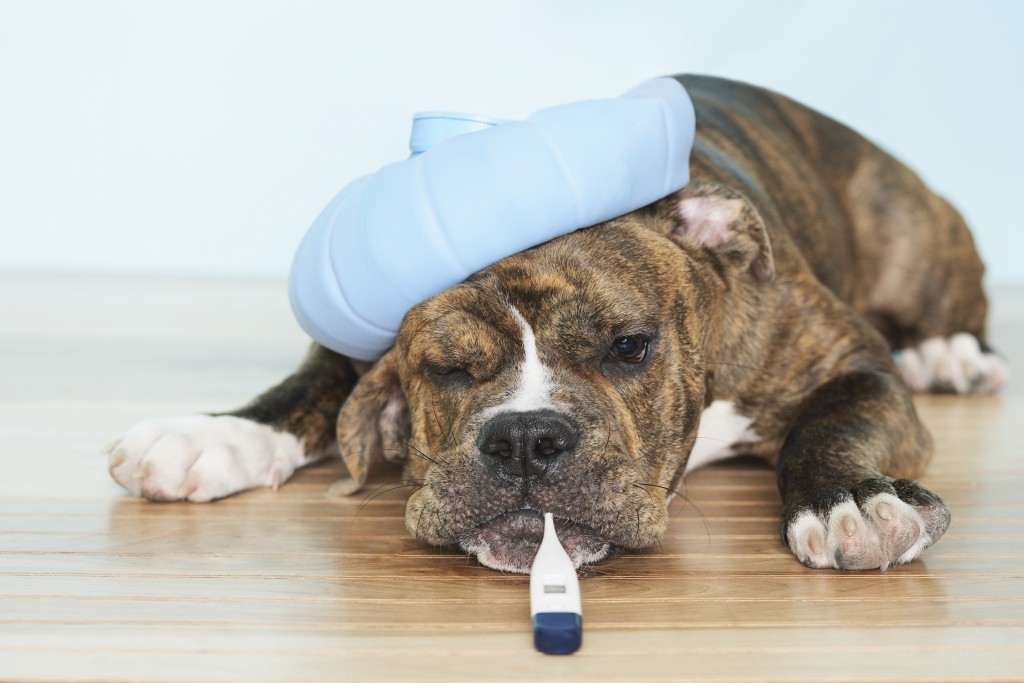 Kennel Cough in dogs will stimulate a coarse, dry, hacking cough about three to seven days after the dog is initially infected. It sounds as if the dog needs to “clear it’s throat” and the cough will be triggered by any extra activity or exercise. Many dogs that acquire Kennel Cough will cough every few minutes, all day long. Their general state of health and alertness will be unaffected, they usually have no rise in temperature, and do not loose their appetite. The signs of Canine Cough usually will last from 7 to 21 days and can be very annoying for the dog and the dog’s owners. Life threatening cases of Kennel Cough are extremely rare and a vast majority of dogs that acquire the infection will recover on their own with no medication. Cough suppressants and occasionally antibiotics are the usual treatment selections.

Actually, clinical cases of Kennel Cough are usually caused by several infectious agents working together to damage and irritate the lining of the dog’s trachea and upper bronchi. The damage to the tracheal lining is fairly superficial, but exposes nerve endings that become irritated simply by the passage of air over the damaged tracheal lining. Once the organisms are eliminated the tracheal lining will heal rapidly.The most common organisms associated with Canine Cough are the bacteria called Bordetella bronchiseptica and two viruses called Parainfluenza virus and Adenovirus and even an organism called Mycoplasma.

HOW IS IT TRANSMITTED?

The causative organisms can be present in the expired air of an infected dog, much the same way that human “colds” are transmitted. The airborne organisms will be carried in the air in microscopically tiny water vapor or dust particles. The airborne organisms, if inhaled by a susceptible dog, can attach to the lining of the trachea and upper airway passages, find a warm, moist surface on which to reside and replicate, and eventually damage the cells they infect.

The reason this disease seems so common, and is even named “Kennel” cough, is that wherever there are numbers of dogs confined together in an enclosed environment such as a kennel, animal shelter, or indoor dog show, the disease is much more likely to be spread. The same is true with the “colds” spread from human to human… they are much more likely to occur in a populated, enclosed environment such as an airplane, elevator, or office. All it takes for contagion to occur is a single source (infected dog), an enclosed environment, and susceptible individuals in close proximity to the source of the infection. Infected dogs can spread the organisms for days to weeks even after seeming to have fully recovered!

NOTE: Even in the most hygienic, well ventilated, spacious kennels the possibility of a dog acquiring Kennel Cough exists. Kennel Cough can be acquired from your neighbor’s dog, from a Champion show dog at a dog show, from the animal hospital where your dog just came in for treatment of a cut paw… Try not to blame the kennel operator if your dog develops Kennel Cough shortly after that weekend stay at the kennel! There may have been an infected dog, unknown to anyone, that acted as a source for other dogs in the kennel.

Many dogs will have protective levels of immunity to Kennel Cough via minor exposures to the infective organisms and simply will not acquire the disease even if exposed. Other dogs that may never have had immunizing subtle exposures will be susceptible to the Bordetella bacteria and associated viruses and develop the signs of coughing and hacking.

HOW IS IT TREATED?

Many dogs that contract Kennel Cough will display only minor signs of coughing that may last seven to ten days and will not require any medication at all. The majority of dogs with the disease continue to eat, sleep, play and act normally… except for that annoying, dry, non-productive coughing that seems so persistent. It is always a good idea, though, to have any dog

Examined if coughing is noticed because some very serious respiratory diseases such as Blastomycosis, Valley Fever, Heartworms and even cardiac disease might display similar sounding coughing. Your veterinarian, through a careful physical exam and questioning regarding the dog’s recent environment, will be able to establish if the dog’s respiratory signs are from kennel Cough or some other respiratory insult.

Treatment is generally limited to symptomatic relief of the coughing with non-prescription, and occasionally prescription, cough suppressants. If the dog is running a fever or there seems to be a persistent and severe cough, antibiotics are occasionally utilized to assist the dog in recovering from Kennel Cough. It can happen that secondary bacterial invaders will complicate a case of Kennel Cough and prolong the recovery and severely affect the upper airway. Therefore the use of antibiotics is determined on an individual basis.

HOW IS IT PREVENTED?

Many dogs, exposed to all sorts and numbers of other dogs, will never experience the effects of Canine Cough. Some dog owners, though, prefer to take advantage of the current vaccines available that are quite effective in preventing the disease. Usually these dog owners will have to board, show, field trial, or otherwise expose their dog to populations of other canines. Since the chances of exposure and subsequent infection rise as the dog comes in close proximity with other dogs, the decision to vaccinate or not to vaccinate varies with each individual circumstance. Generally, if your dog is not boarded or going to field trials or dog shows, you may not have a high level of need for vaccinating your dog against Kennel Cough. If your dog happens to acquire Kennel Cough, it will then have some immunity to subsequent exposures. The length of time these natural exposures and the vaccinations will produce protective immunity will vary greatly. Vaccination seems to have a subjective and elusive answer.

Be aware that vaccinating with just the commercial Kennel Cough vaccine alone (contains only the Bordetella agent) may not be fully protective because of the other infectious agents that are involved with producing the disease. Some of the other agents such as Parainfluenza and Adenovirus are part of the routine vaccinations generally given yearly to dogs. The intra-nasal Bordetella vaccine may produce immunity slightly faster than the injectable vaccine.

NOTE: Any vaccine takes days to weeks to stimulate the dog’s protective immunity to the disease. Vaccinating a dog the day it is exposed to disease may not be protective. If you plan to board your dog, or protect it from exposure, remember to vaccinate a few weeks prior to potential exposure to allow full protective immunity to build up.