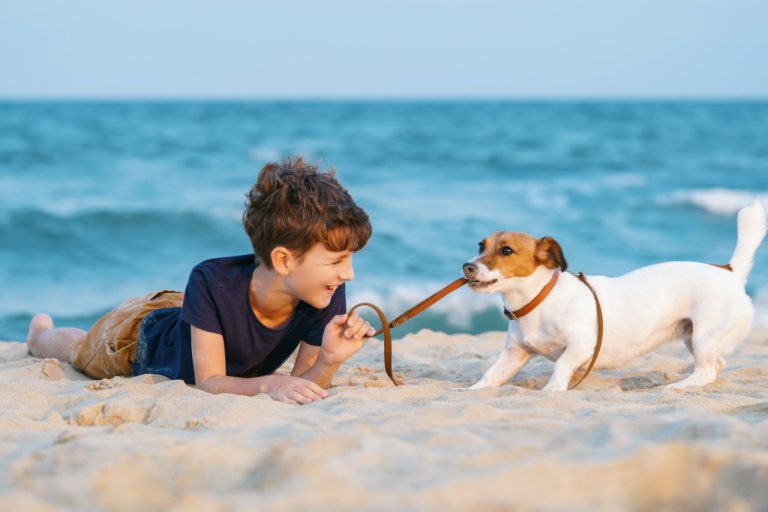 In order to understand if your four-legged friend is enjoying his playing session, just look at how he behaves around other dogs, but above all see his reactions. Usually, the difference between game and fight, or between game and aggression, can be quite obvious.

First of all, if the dog were to find himself in a pickle, he would certainly try to report it to his owner through barking or in other ways. In short, the owner would have the opportunity to notice the danger of the situation.

How to understand if dog is being playful and enjoying his time with friends? It is really not that much of a science. Two or even more dogs are playing in a “healthy” way, that is, not dangerous, when there is no danger for the dogs involved. What we mean with this is that no one should risk getting hurt, and no one should get aggressive toward each other.

Dogs often play by trying to share the same rubber bone, or even by pretending to fight. Others instead nibble each other’s necks, but this is true especially for puppies. Basically, there are different ways in which dogs enjoy playing with one another, but it is up to the owner to try to understand when playing is becoming fighting, and above all how to try to avoid damage.

How to avoid these situations

You can avoid these situations by simply paying attention to the type of dog that your four-legged friend chooses as a playmate. This means that you have to be careful at the park, if your dog plays with animals of a larger size than his, and you should also verify whether they tend to be aggressive at times.

The best way to do that would be to ask the owner if his dog is aggressive, if he is sociable with other animals, and only then, let the dogs play freely. In addition to this, it is better to keep your dog on a leash if you are taking a walk: in this case, it will be very difficult for him to start playing with stray dogs.

But how can you tell if the dogs are getting aggressive?

Picture this: your dog meets another dog at the park and the two start chasing each other and playing … or so it seemed at the beginning. But now they are making a lot of noise and the other dog owner does not know whether to let his dog play or if something is not right and it is better to separate the two.

It is not always easy to recognize aggression from playfulness. While playing, dogs can growl, bite, jump, chase, mount… all without having the real intention of hunting, mating or attacking. For many owners there is not much difference between a real growl and a playful one, and in some cases,  dogs can go from playing to real quarrels in no time.

How to tell if two dogs are playing: some signs

If you are doubtful about the playful intentions of a dog, remember that dogs emit signals that take away “seriousness” from their conduct.

For many owners, these are some of the familiar signs that show them that their dogs want to play. Dogs use these signals to start playing or when there is more risk of misunderstanding, for example when playing with unknown dogs or in front of an action that could have an ambiguous meaning, such as throwing themselves at them.

Making small jumps by bending the tail and without moving from the current spot or approaching and moving away from the playmate abruptly are other signs that serve as an invitation to play.

How to tell if two dogs are fighting

These signs help the owner understand the difference between playfulness and aggression. However, their absence does not imply that the dog is not playing and is about to become aggressive. In these cases, other aspects are used to decide whether it is appropriate to interrupt the interaction:

When this happens or in case of doubt about whether the dogs are not playing it is important to intervene to separate them before a real aggression is triggered.

If the dogs should become dangerous, that is, if you perceive that there is a risk that one of the two will get hurt, then you should definitely stop your four-legged friends. If a real attack has started, try to call your dog back, and invite the owner of the other dog to do the same.

If you are dealing with a stray dog, try to call your dog back to you anyway. The ideal thing would be to teach the dog to stand by your side and teach him the “Come” command. In this way, if such a situation were to occur, it would be easily controllable.

If you are at the park, obviously it will be much easier to try to make the other owner understand that he has to stop his dog, while trying to do the same with yours. However, the situation becomes increasingly difficult if your dog is playing with a stray dog, and they started injuring each other.

A useful way to distract them could be to try to throw a snack or some other distraction. In the meantime, call for help if they are already seriously injured.

Sometimes, our furry friend’s behavior can look quite enigmatic to us. Especially if there have already been accidents or fights with other dogs, you might want to make sure that you know how to recognize the “good signs” of a playdate from the bad ones, as well as getting your dog to understand that it is not ok to attack his friends and be aggressive toward others.

How should you do that?

The best way would be to get the help of a trained professional. At Very Important Paws, we are proud to count on some of the best dog trainers that money can buy: contact us now to know more about the type of services we offer, and learn how to discern good playfulness from aggressive behavior.